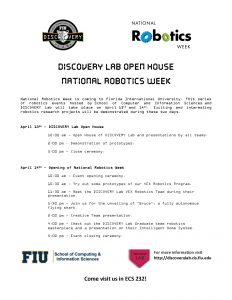 Newly appointed S. Sitharama Iyengar, with support from the University and the School of Computing and Information Sciences, has been working to attract the best and brightest students and faculty in an effort to break into the countryäó»s top 30 research institution.

äóìI fell in love with this university, and itäó»s potential to be great,äó said Iyengar, who completed his first semester at the University. äóìPrior to me being at FIU, I spent 20 years at LSU taking their Robotics Research Laboratory from obscurity into prominence to which it today enjoys a top 30 ranking. I feel that this department and FIU as a whole can compete with the likes of MIT, Cal Tech and Stanford.äó

Recently, The Huffington Post noted FIU as a university äóìworking hard to expand their allure to those wishing to get into IT fields, entrepreneurship in tech, etc,äó after hosting the 2011 Venture Capital Conference.

Aside from regular funding the school receives, it has procured external funding in excess of $4 million from the Department of Energy, and National Science Foundation to name a few in an effort to develop cutting edge systems for the public and private sector to use.

The Department has also developed a partnership with Citrix Systems, a leading developer in cloud based technologies, to bring world renowned Computer Scientists as part of their Distinguished Lecture Series, of which some are from the Oak Ridge National Laboratory.

When asked why the University is focusing its resources on information technology, Iyengar said, äóìComputer Science and Information Sciences is like a heart, we sit in the center of the information world and connect every discipline to each other.äó

When asked how CIS accomplishes this he gave a few examples.

äóìWhether it be in collaboration with the Architecture school and their students in Urban Planning, we facilitate software that will allow for the efficient flow of traffic and the ability to develop a system where if a student needs to find parking they will be able to look on a screen and be given the information with the highest probability of parking.äó

Shaynne Mantilla, a junior studying business administration felt it was äóìinteresting, to see how small businesses could capitalize on the efficiency the IT field could provide in expanding their growth, and if the benefit would out value the initial cost of implementation and the sustained cost of maintaining an IT department.äó

äóìIäó»m glad to hear the IT field is making headway in the job market, having the ability to be involved in various industries allows for personal growth. The IT field is one of the pioneering industries when it comes to connecting people, and businesses globally with each other.äó

For Iyengar, no amount of faculty could ever replace quality students. He attributes all of his success to his students, having graduated 42 Ph.D. students and author of over 400 research papers he believes in äóìexploring and nurturing every students creative talent and point their effort in the right direction.äó

One program Iyengar hopes to inaugurate before the end of the semester is what he calls a, äóìDiscovery Lab.äó

The sole concentration of this lab is to behave as an arbiter for the students at FIU to apply for Patents and Intellectual Property Rights all in an effort to bring further visibility and notoriety to the students, University and region. Dr. Iyengar continues, äóìMuch like Silicon Valley in California, I want that same attention to be paid to Miami and FIU so that a sort of äóÖFIU Valleyäó» is in essence born.äó

Jessica Robles, sophomore studying art put it plainly about the growing interest FIU has in IT students, äóìI think itäó»s cool, itäó»s just like the IBM commercial making a smarter planet, it all seems to be coming true!äó

äóìOur goal as professors of CIS is to master the art of global innovation and in that regard give our students the tools they need to be the leaders of the world for the next century,äó said Iyengar.