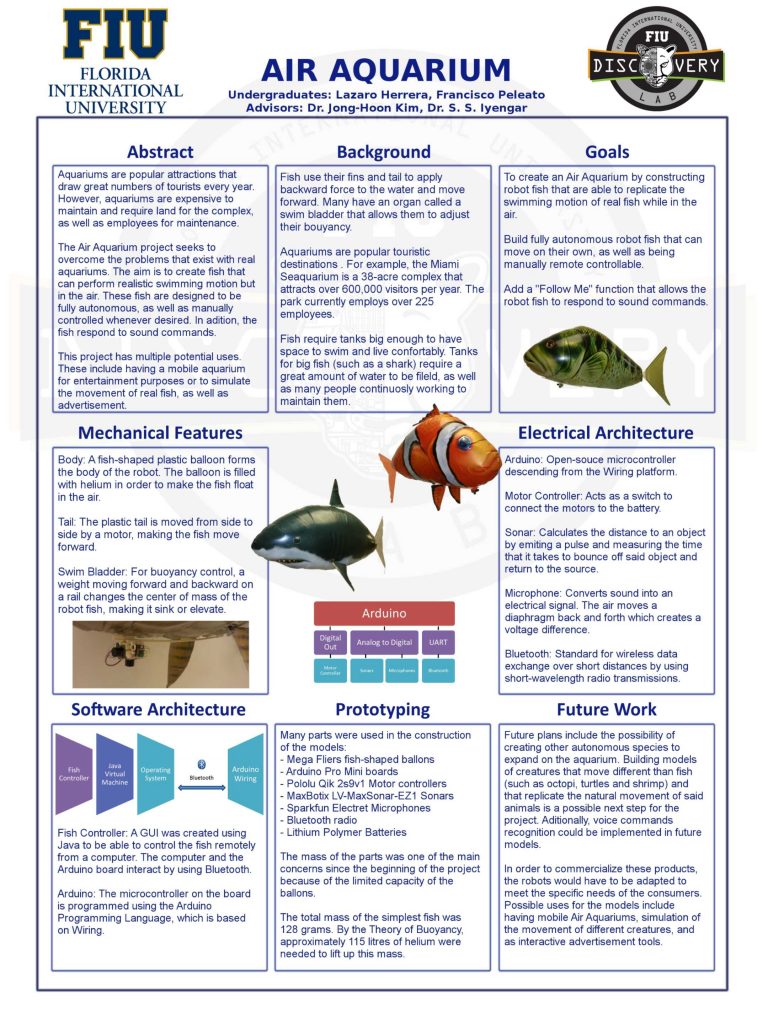 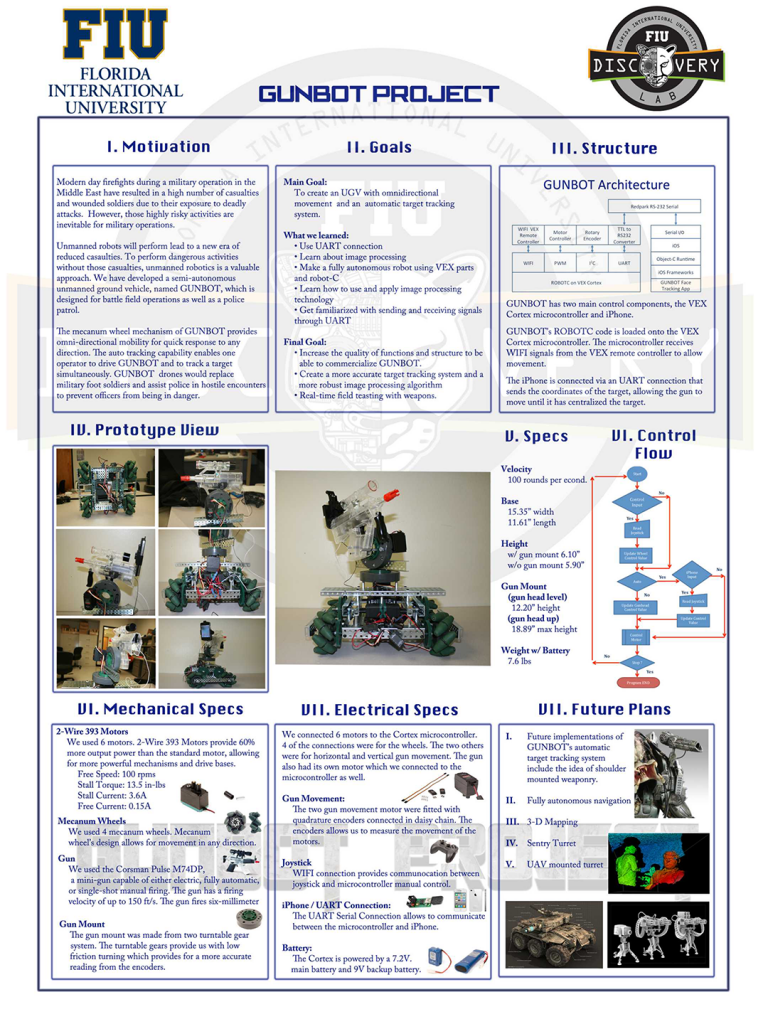 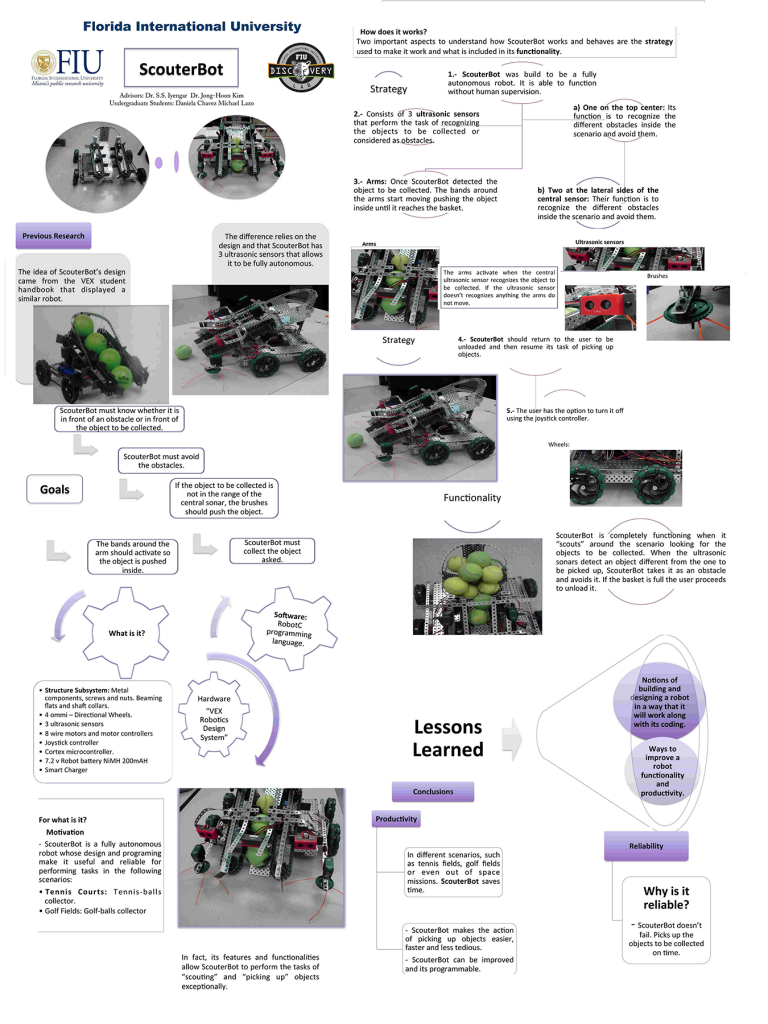 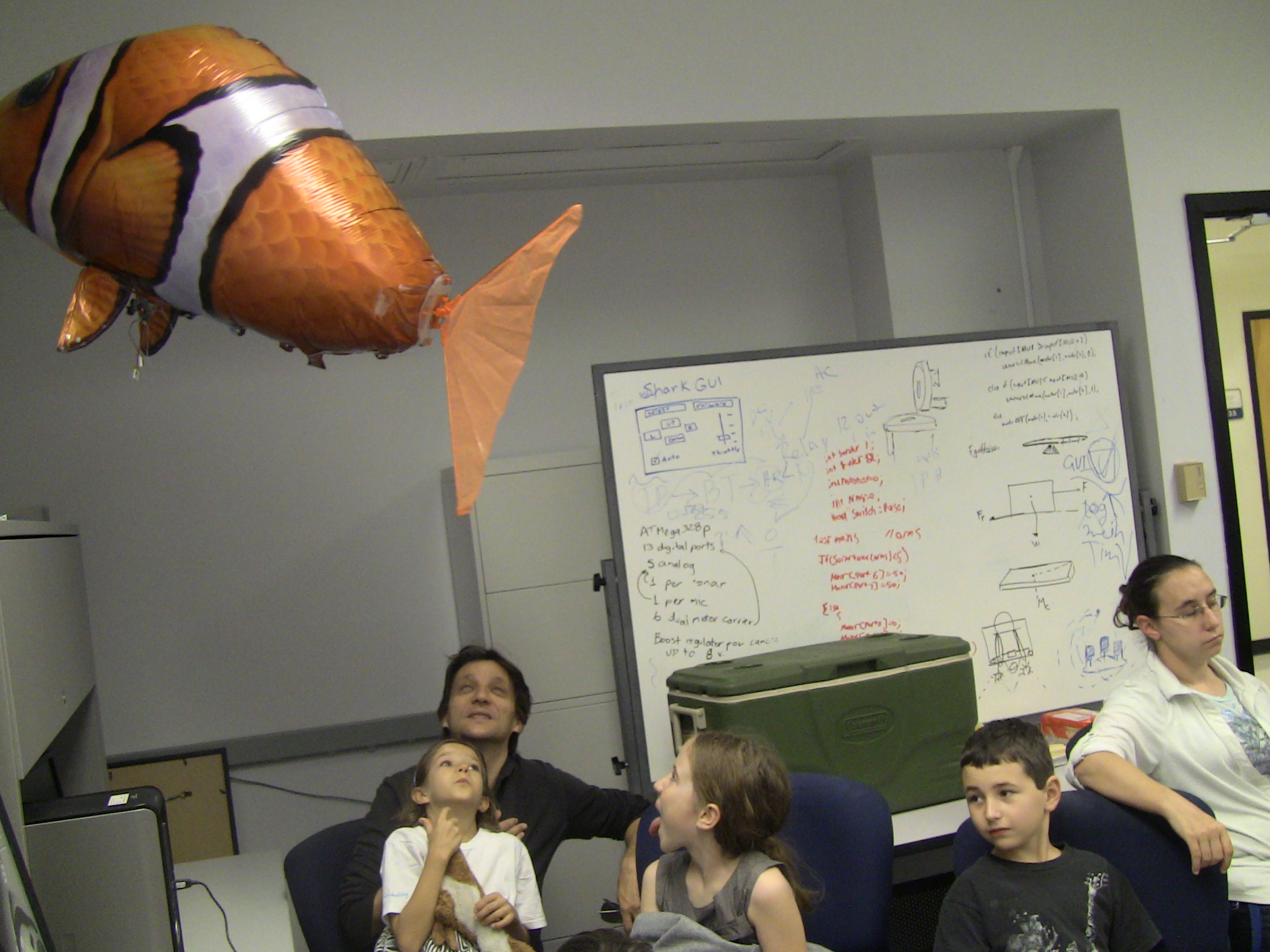 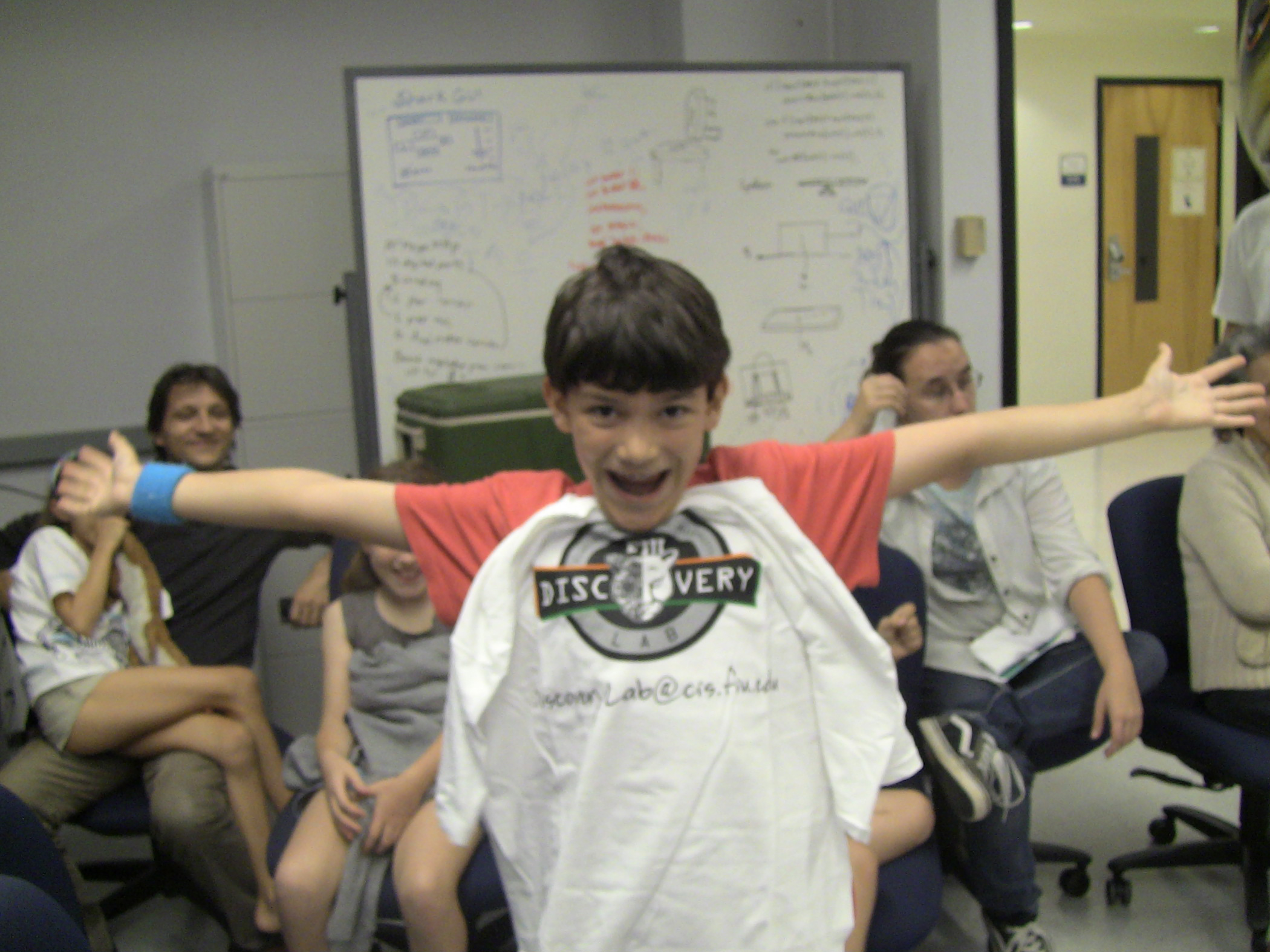 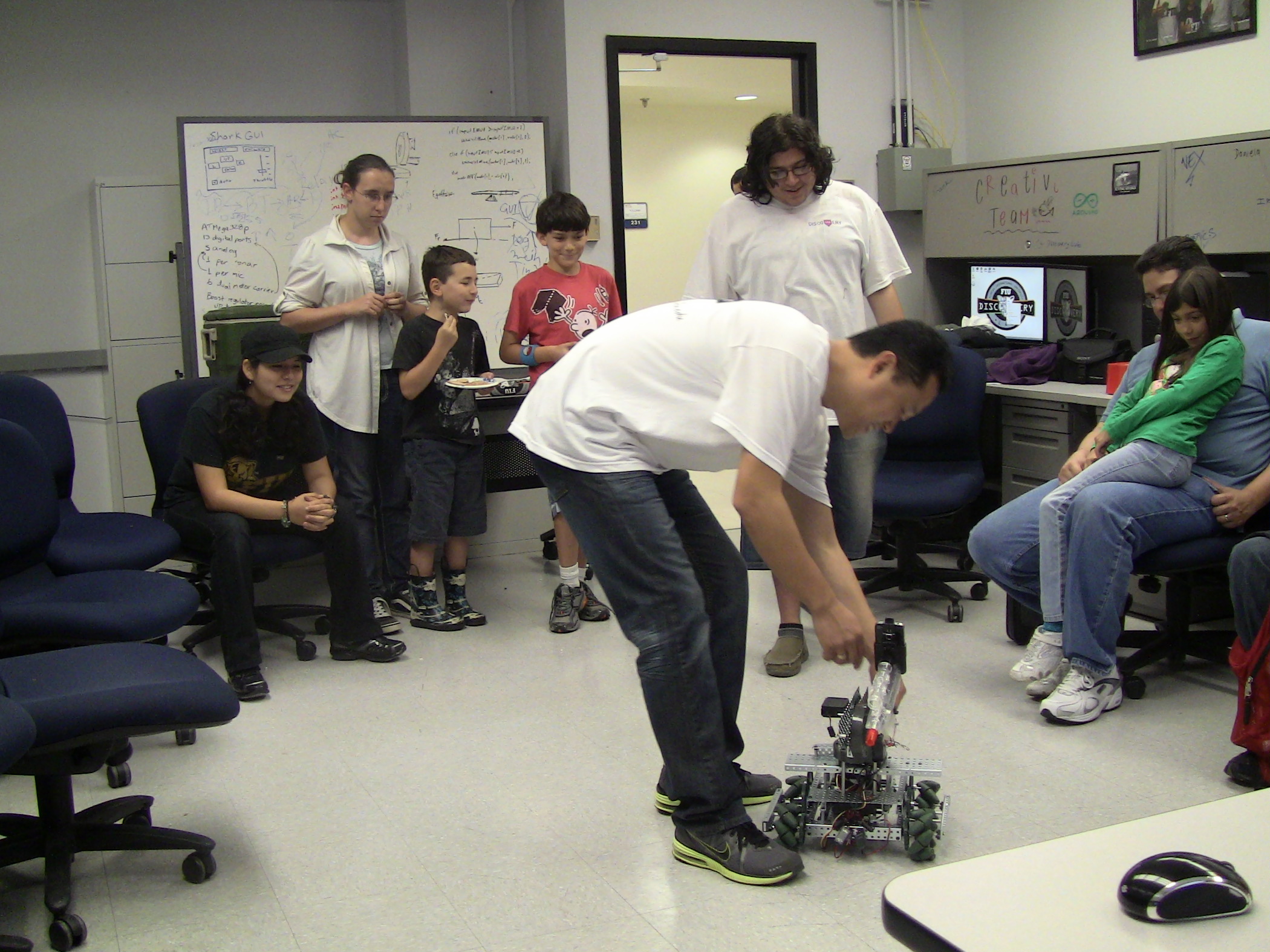 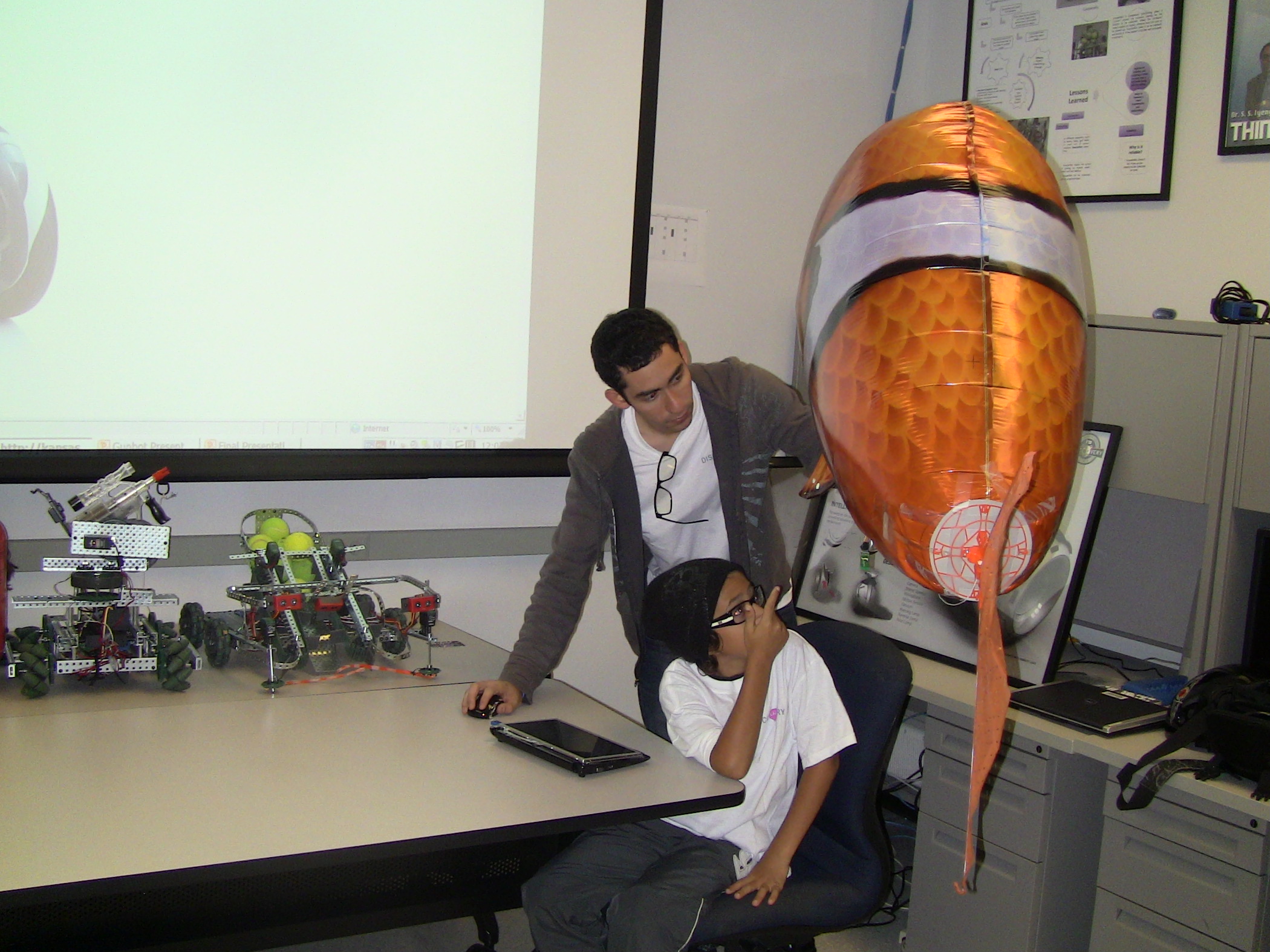 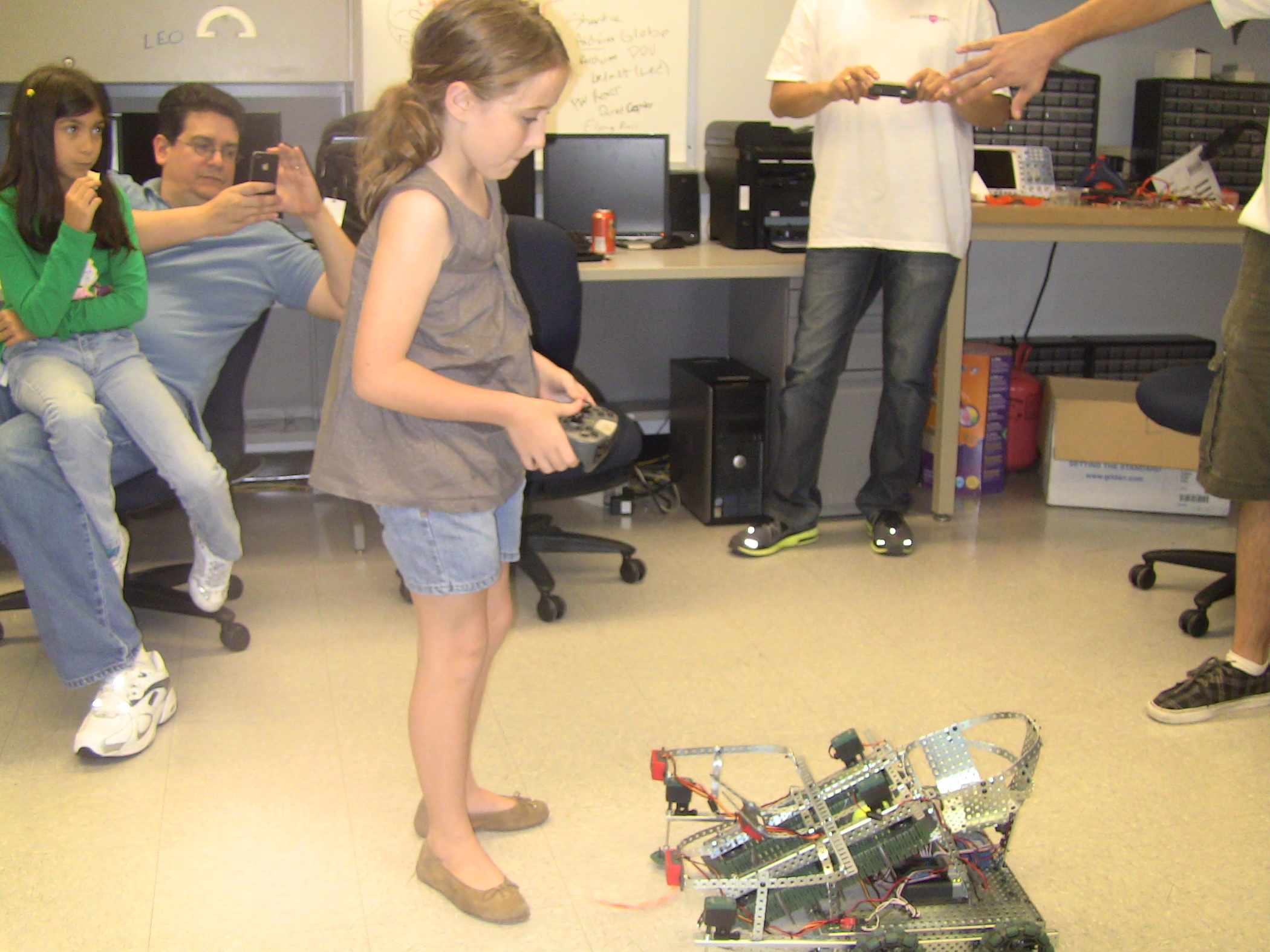 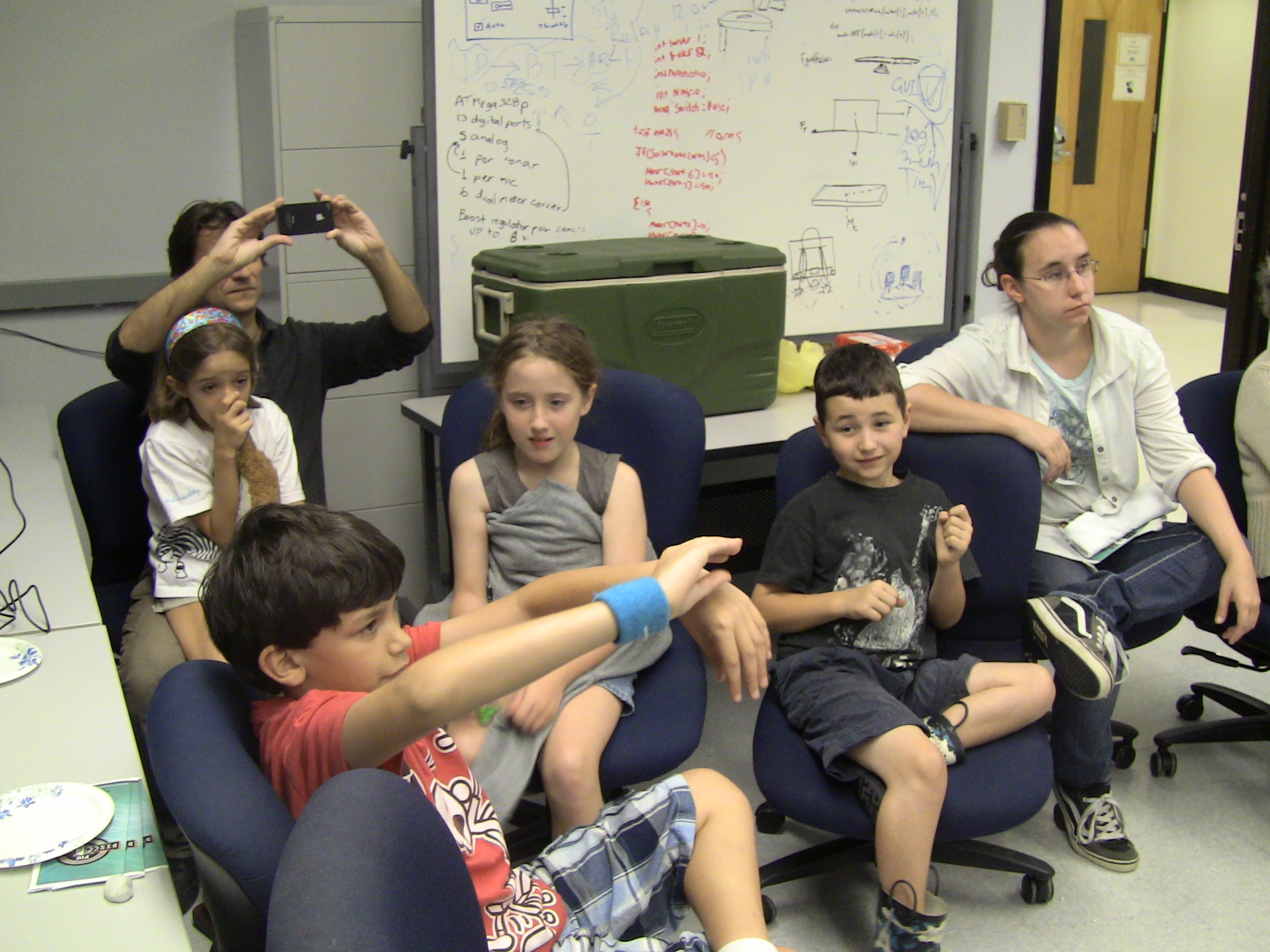 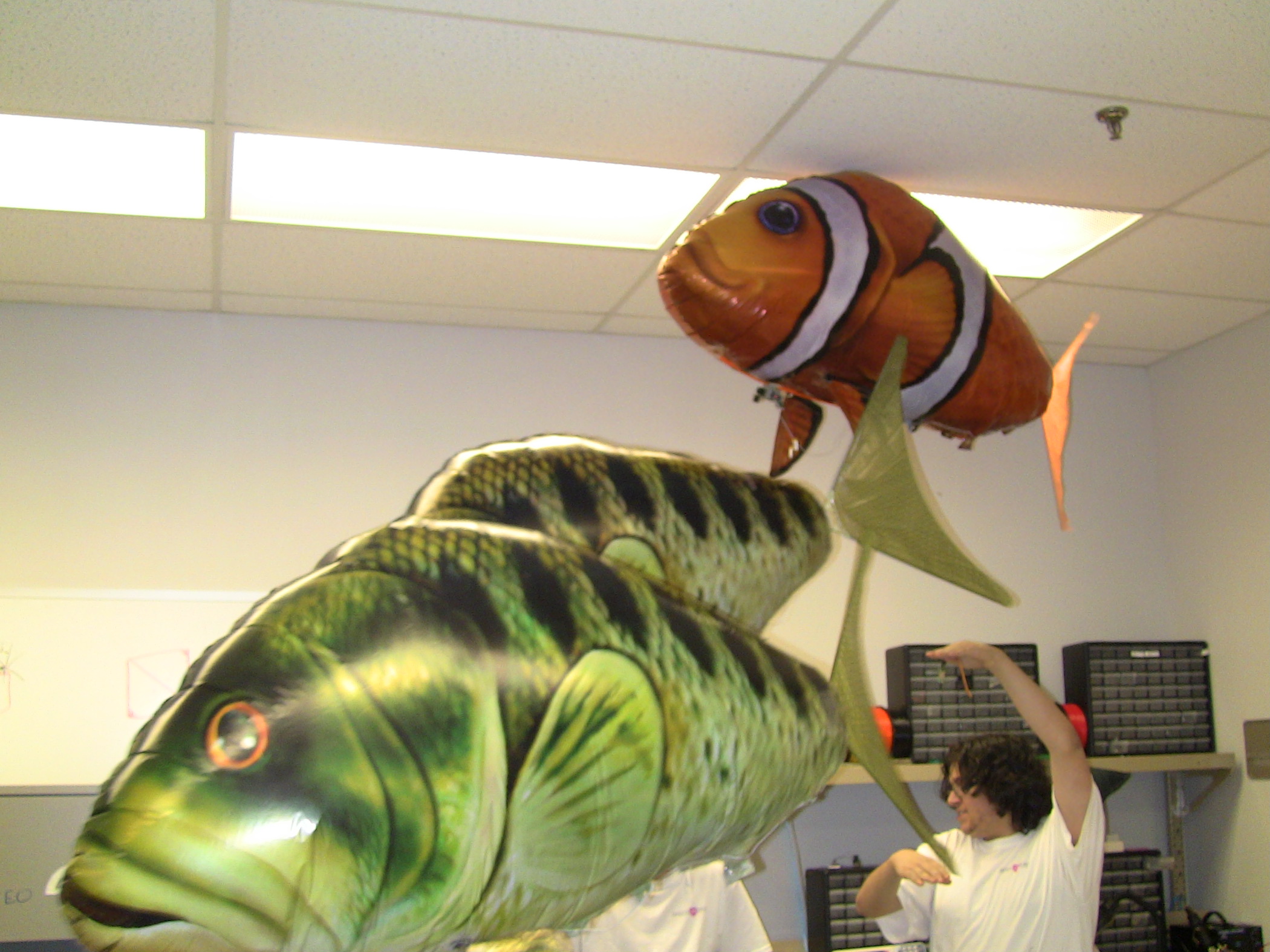 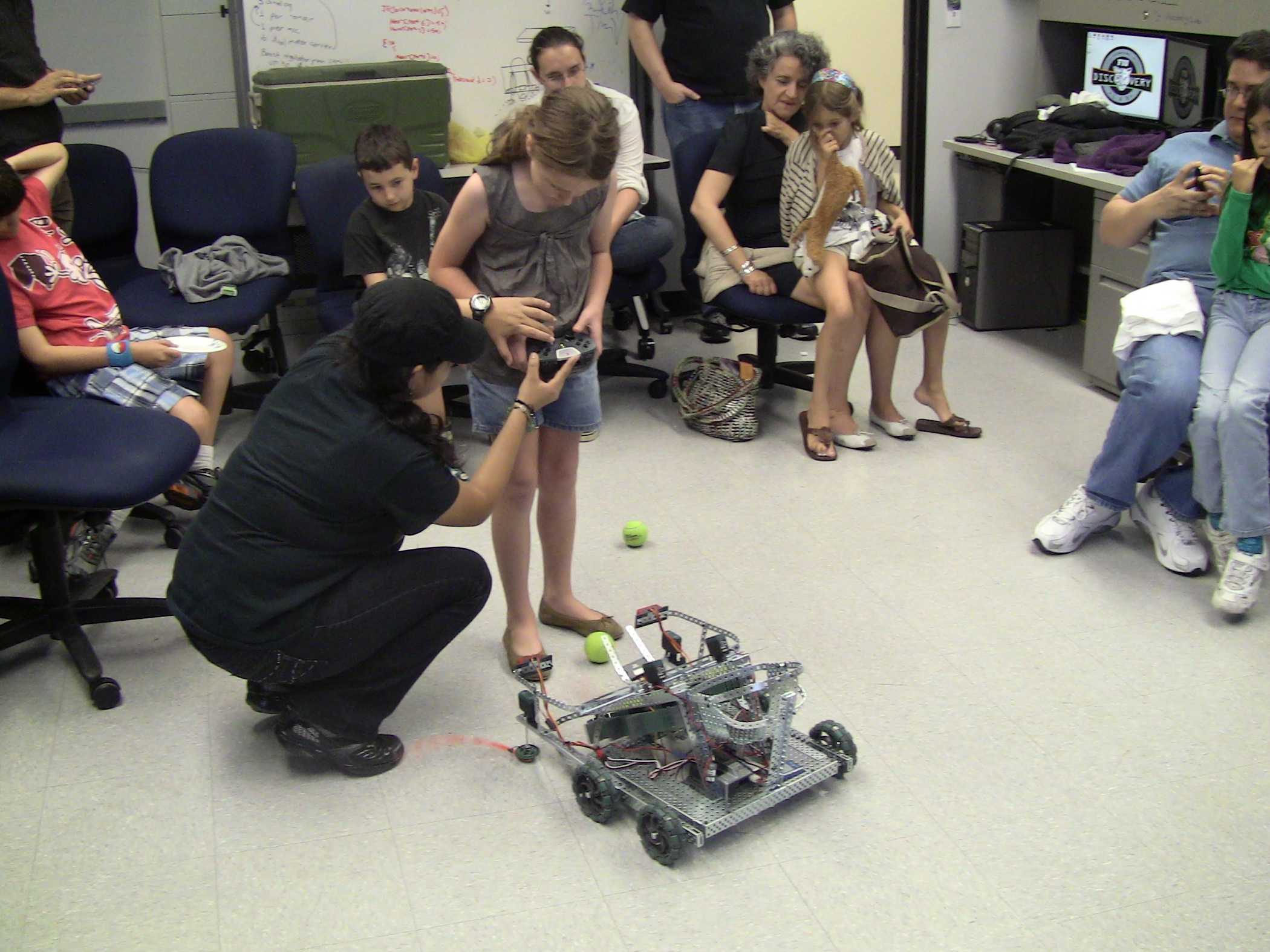 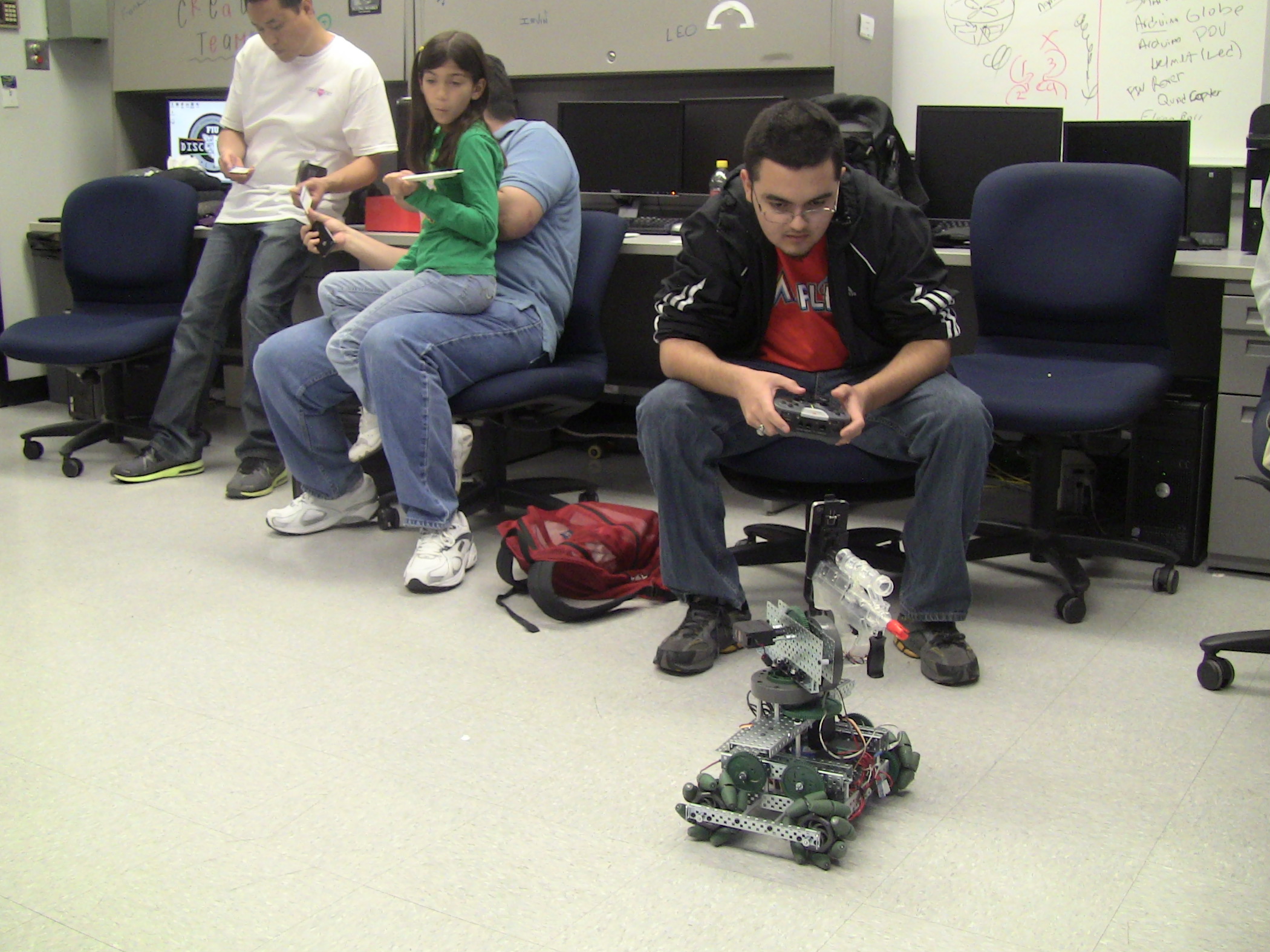 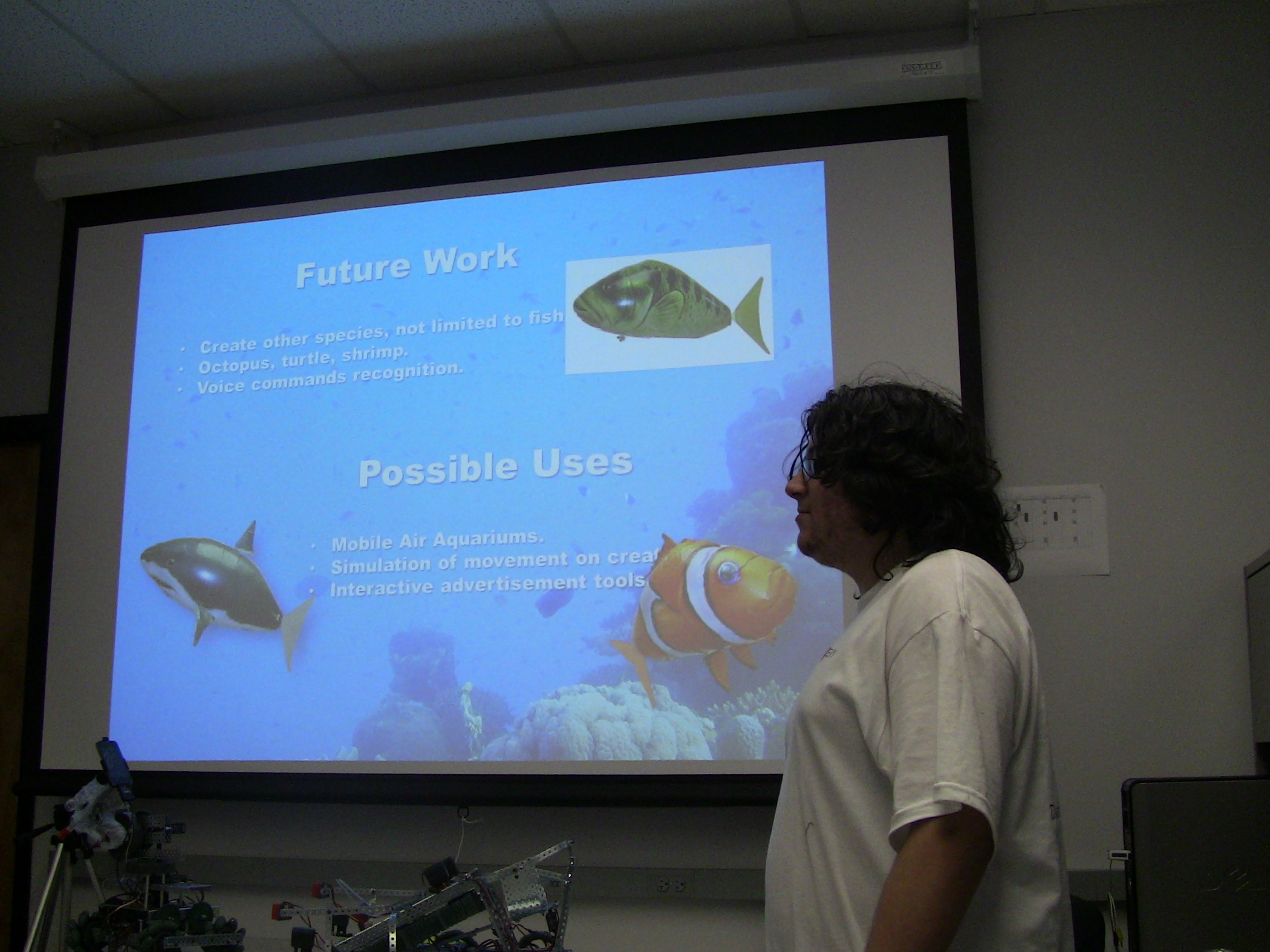 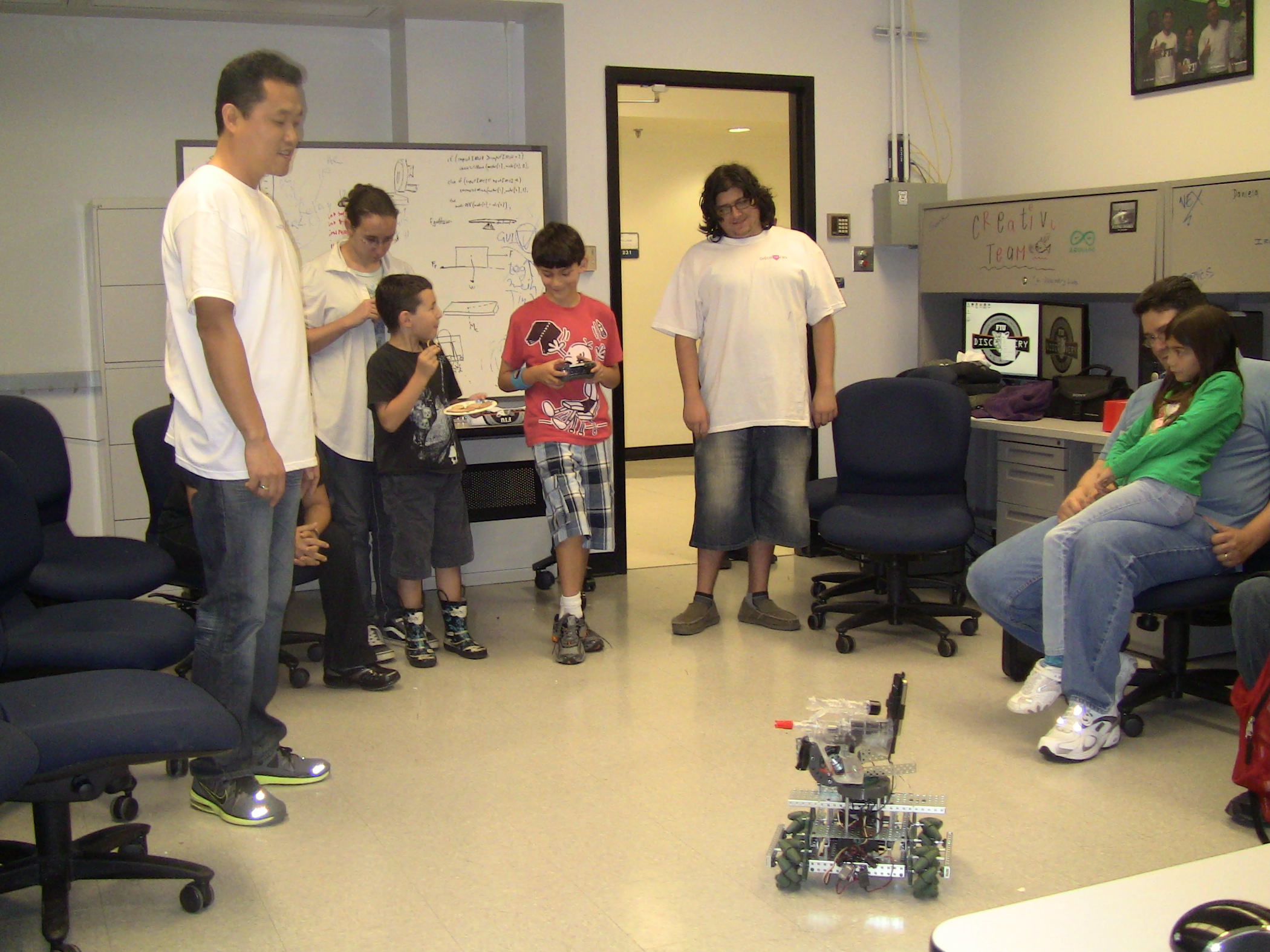 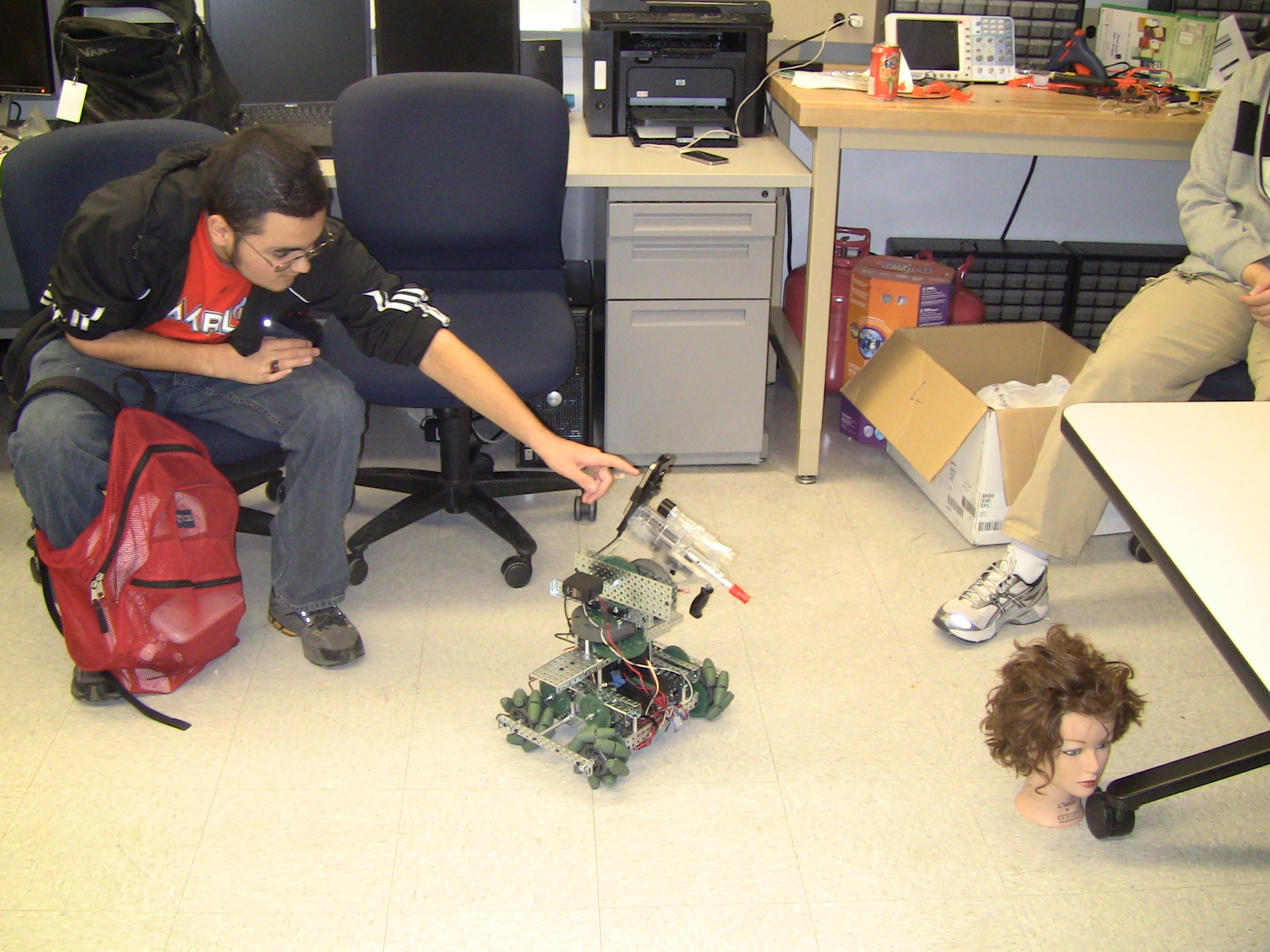 Lazaro Herrera has been obsessed with robots since junior high.

A native of Santa Clara, Cuba who came to the United States when he was 12, Herrera spent his junior high and high school years learning about robots, building robots, and entering them in competitions. Today, when the sophomore computer science major is not in class, heäó»s working in the Florida International University School of Computing and Information Sciences Discovery Lab. Thatäó»s where he and other students spend hours designing and building robots, under the guidance of Laboratory Director Jong-Hoon Kim, who encourages his students to äóìThink Big. Start Small.äó

äóìWe work long hours, but we are working on exciting projects and collaborating with other students,äó Herrera said. äóìItäó»s about the journey. Itäó»s about the learning.äó

Herreraäó»s dreams of building ever more complicated robots, will get a boost from a $50,000 donation from State Farm. State Farm will officially present FIUäó»s School of Computing and Information Sciences with a $50,000 check for its Discovery Lab on Tuesday, April 10, at 2:30 p.m. in Room 243 of the Engineering and Computer Science Building .

The Discovery Lab, created last fall, is aimed at developing products for the marketplace. At the same time, the laboratory provides students with the hands-on experiences they need to solve real-world challenges, develops student-led research opportunities, fosters studentsäó» entrepreneurial skills, and trains a new generation of IT professionals who reflect the diversity of South Florida. The robots Herrera and his fellow students designed will be exhibited at the April 10 event.

äóìThe Discovery Lab provides a platform to develop many new ideas,äó said FIU School of Computing and Information Sciences Director Sitharama S. Iyengar. äóìThe lab is comparable in its mission to labs at top universities. We are educating entrepreneurs, sustaining research and, developing products that can be commercialized. We are training the next generation of students with the 21st Century skills they need to succeed.äó The money from State Farm will help the laboratory acquire key design and development tools it needs to advance its mission. The funds will go toward workstations, servers and software licenses, as well as help fund a design competition for students. The donation is part of FIUäó»s longstanding partnership with State Farm. The corporation has supported a variety of initiatives across the university including the State Farm Financial Literacy Lab at FIUäó»s College of Business Administration, a state-of-the-art trading, research, and teaching laboratory designed to empower students and the community with knowledge of capital market activities. These include equity and debt issuance and investment analysis, financial planning, cash management, derivatives, and investment management.

During the check presentation event, the robots demonstrating their abilities will include a trio of helium balloons shaped like fish that will be used to create an äóìair aquariumäó through the use of object and sound detectors. Other robots will include äóìGunbot,äó which shoots plastic pellets, and a robot designed to pick up tennis balls. The lab also is developing other technologies, including those that can be integrated with smart phones and technology that can enhance security as well as user convenience

äóìThere are no restrictions in this laboratory,äó Kim said. äóìThese students are hardworking and motivated. They can achieve great things and have a tremendous impact.äó

This news is from http://news.fiu.edu/2012/04/state-farm-funds-student-innovation-dreams-at-florida-international-university-discovery-lab/38338

In this post, Frank Tobe, a robotics analyst and publisher of The Robot Report, describes a recent debate between two prominent robotics executives and their opposing views on how to nurture profitable robotics businesses.

What’s the best approach to building commercially successful robotics companies: To develop specific, proprietary products that satisfy the needs of large markets, or to develop and share free, open-source technologies and wait for the commercial applications to emerge?

These two points of view were presented by executives from iRobot and Willow Garage in a spirited cocktail party debate the other evening in Lyon, France, at InnoRobo 2012, a trade show for service robotics. Here’s how it happened, who they were, and what they said.

Colin Angle, co-founder and CEO of iRobot, was one of the InnoRobo keynote speakers, and after his presentation (about the need for robotic solutions in healthcare), I met him for an interview. I asked him, among other things, what he thought about Willow Garage’s Robot Operating System (ROS) open source software strategy. Angle said he thought it was dangerous to the industry and was fearful that it was also detrimental to the monetizing of the service robotics sector in particular.

Later that day I was talking with another presenter, Robert Bauer, the executive director for commercialization at Willow Garage. In his talk, Bauer made the point that, when it comes to robotics, hardware was farther along than software and therefore application software was where the robotics industry needed help. When I told Bauer what Angle had said, Bauer became feisty and said he’d love to debate Angle as to which approach contributed more to product development and commercialization.

I thought a debate would be great. I just didn’t know it would happen just a few hours later, at a cocktail party that same evening. I was casually talking with Bauer when Angle came by to say hello. I introduced them to each other — and the fun began.

Angle suggested that Willow Garage’s approach of freely providing such a key component as the robotic operating system — and the extensive libraries that go with ROS, not to mention its source code — was tantamount to letting the biggest consumer electronics giants gobble up any mass market applications and re-market them globally at low cost because they already have (or could easily reverse-engineer) the hardware, could produce it cheaply, the operating system was free courtesy of ROS, and the only real cost was the acquisition of the application.

Angle thought that the approach was dangerous and led to losing a potentially U.S./European market to offshore commodity conglomerates. (The dangers of losing trade secrets to foreign conglomerates was the subject of a recent Bloomberg Businessweek issue.) He added, “Robotics innovation represents a tremendous opportunity for economic growth akin to automobiles, aerospace, and information technology. If we are to freely share our ‘intellectual capital’ on the open market we risk losing the economic engine that will advance our economies and send growth and jobs overseas.”

It was Bauer’s turn now, and he argued that Willow Garage’s objectives were to stimulate the industry by enabling participants to not have to reinvent the many cross-science elements of robotics ventures; to reuse software under the premise that by so doing it saves developer time and allows researchers to focus on research. By giving them free access to the tools, libraries, and simulation capabilities of ROS, Willow Garage hopes to advance the state-of-the-art in autonomous robotics technologies — and the commercial applications will follow.

Bauer also said that, once a successful application was developed, then the new endeavor would likely lock down the operating system and application software in order to protect their invention.

Angle responded by suggesting that ROS itself could be locked down, protected, and commercialized — and that it should be done right away. What the robotics industry needs, he said, is successful robotics companies — profitable companies selling in-demand products and rewarding employees and investors. (This week, Amazon acquired Kiva Systems, a provider of warehouse robotic system, for $775 million.) That could happen if ROS “privatized;” What’s more, he added, unless ROS is protected and made stable and secure, it could never be used for sensitive (defense, space, security) solutions, and until it became rugged, secure, and stable, it could never be used in factories that cannot afford down time from their robots or software.

He said it would make him happy if all the people that displayed their robots at InnoRobo were successful and wealthy, but that the opposite was more likely because the right big-market robotic applications hadn’t happened just yet.

The discussion went on and ended with Bauer inviting Angle to continue the discussion onsite at Willow Garage and Angle agreeing to do it.

I hope I have presented the two positions fairly because I think that both sides have merit. Using the analogy that developing apps for smartphones and tablets is similar to developing applications for service robots in the open source community of shared libraries, imagine how much talent is being squandered in the whimsy of making a “fun app”? Do we have to sift through the chaos and diversity of thousands of apps to find the few — if any — that are suitable for real business tasks? Or would we be better served to rethink how we satisfy real needs by building specific products to satisfy those needs?

What do you think?

Article can be found  http://spectrum.ieee.org/automaton/robotics/robotics-software/irobot-willow-garage-debate